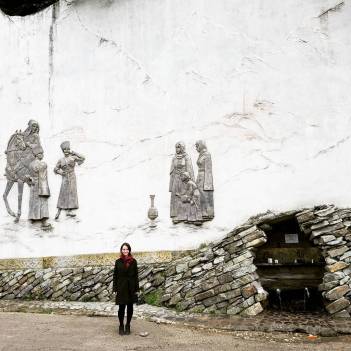 My research focuses on how individuals and communities respond to crises, ranging from state collapse to different forms of armed conflict. Relatedly, I investigate how armed conflict impacts governance in the post-conflict period. My research draws on fieldwork in the North Caucasus, where I conducted interviews, trained and coordinated teams of local enumerators to collect original survey data, and analyzed local newspapers. I pair this original data with locally and externally archived oral histories, NGO accounts, and secondary data on violence.

What are the alternatives to the state after armed conflict, and when do citizens encounter and rely on them instead of, or alongside, state authorities? My book project, “Reconfiguration of Sub-National Governance: Responses to Violence and State Collapse in the North Caucasus,” explains the heterogeneous effects of armed conflict on sub-national governance. While acknowledging the role of inherited institutions, my multimethod investigation shows how they were reshaped during the breakup of the Soviet Union, creating unintended consequences and the basis for governance today.

I argue that armed conflict shapes the range of governance alternatives and how citizens choose between the alternatives available. First, I trace how armed conflict alters the relationships within the state and to ostensibly non-state authorities – specifically religious and customary actors, complicating state/nonstate distinctions and impacting the range of governance alternatives available to citizens. Second, I turn to the demand-side, examining how different experiences of violence impact civilian choices, shaping who residents turn to for which domains of governance.

The investigation reveals that despite historical and structural similarities, armed conflicts in the 1990s set neighboring republics down divergent governance trajectories: centralized (Chechnya), polycentric (Dagestan), and mediated (Ingushetia). Disaggregating the organization and logic of governance to compare goods provision, dispute resolution, and symbolic practices alongside conventionally-studied governance dimensions like extraction and coercion reveals that while state institutions regulate coercion and extraction, communities exhibit significant variation in how they regulate disputes, provide public welfare goods, and interject into symbolic practices.

Beyond Support and Resistance: Civilian Strategies Amidst Conflict in Post-Soviet Chechnya

Abstract: Recent studies demonstrate that civilians maintain agency amidst violence, focusing on civilian support or resistance of armed actors and their participation in formal institutions like voting. Civilian support is theorized to be essential for armed actors, in turn highlighting the agency of civilians to influence wartime dynamics. Building on this work, this paper presents a typology of civilian strategies that decouples agency from resistance and support to armed actors by incorporating more inward-facing tactics of autonomy and coping. I suggest that understanding wartime behavior, particularly during conditions of disorder, requires attention to these practices, which allow for limited agency even when more overt channels of participation have been repressed or co-opted and citizens have “withdrawn from politics.” Drawing on interviews and oral histories from the Chechen case, this paper applies the typology to reinterpret residents’ behaviors during the war. I show that rather than influence armed actors or subvert the power-distribution, most residents sought to minimize intrusion into their lives by both sets of armed actors, working to preserve informal networks and solve problems within them. As residents found themselves caught between two armed actors they felt helpless to influence, civilian strategies narrowed and became more inward-focused. However, with limited exit options residents found ways of exercising agency by creating and maintaining networks of autonomy, reminiscent of practices used during Soviet rule.

Post-Conflict Governance: A Framework and Evidence from the North Caucasus

Scholars recognize that the state is not the sole provider of goods and order. Yet existing work prioritizes the study of state or non-state authorities without systematically comparing their relative interjections in citizens’ lives. When researchers do incorporate hybrid governance arrangements, they tend to focus on a narrow range of governance domains. To further these explorations, I present an analytical framework for governance that captures the heterogeneous and often Janus-faced ways that citizens encounter state and ostensibly non-state authorities. I use this framework to ask: How is governance organized in the North Caucuses? Specifically, I inquire into alternatives to state authority and how citizens in the Caucuses encounter these alternatives alongside, or instead of, state administrators. Using original survey and interview data from three sub-national republics in the North Caucasus, I apply the framework to elucidate how citizens perceive interjections by informal and formal authorities, discerning between competing descriptions of local governance. I show that residents relatively consistently identify the regulation of extraction and coercion with state authorities, suggesting an apparent picture of strong state penetration. However, in considering the intersections of authorities and moving beyond these domains, my data reveal significant variation in who residents identify as providing infrastructure, regulating disputes, and managing symbolic practices across republics. In turn, my framework moves beyond asking whether an actor governs to assessing their relative contribution to governance.